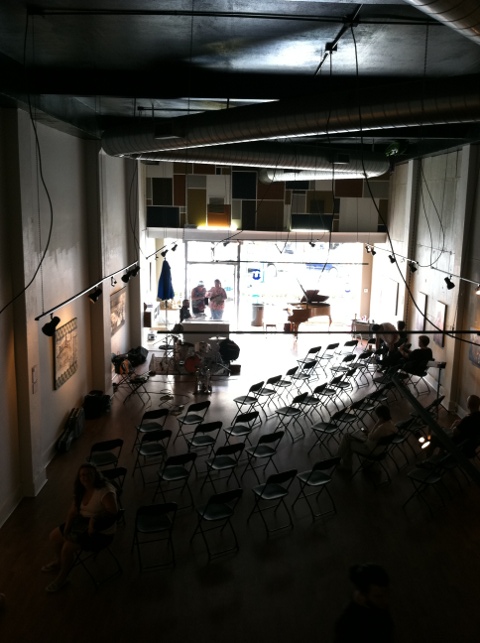 First and foremost, thanks to Kris Tiner for inviting me to perform, to Ted Byrnes for the company and the driving skills, and to both for their musical sense—in play, in real-time. Thanks to Red Oak (Adam Benjamin and Storm Nilson) and Mosaic Orgasm for graciously sharing the stage with us. And, to all who came to Metro Galleries on that hot summer’s afternoon, thanks for listening.

BTW, monda kudos, Ted, Kris and (for the performances coming up in Northern California) Randy McKean. I realized that these performances in July and August represent the longest run of gigs in long time that I didn’t have a hand in organizing! I hope to reciprocate the favor.

Lightheaded kitchen equipment and disciplined barbarism. Greg Burk of MetalJazz gives an account of the July 21, 2011 ResBox including the duo by Ted Byrnes and me:

…Drummer Ted Byrnes and electric guitarist Han-Earl Park launch into fast, busy abstraction. Byrnes tosses kitchen equipment around his kit, keeping up an ever-changing lightheaded commentary. Park applies every technique to his detuned ax—tapping, sliding, muting, twisting the machine heads. It’s simultaneously disciplined and barbaric. For the second time in a week, I witness a guitarist (the other was Allan Holdsworth) sounding as if he’s playing backward, and this time it’s clear that the method involves heavy pumping of a volume pedal. Between assaults, Park re-detunes his guitar. Ever ready for audience participation, [G. E.] Stinson yells, “Dude, why bother?” Park explains that he’s careful to avoid accidental tonality. [Read the rest…]

Ted Byrnes is a drummer/percussionist living is Los Angeles. An alumni of the Berklee College of Music in Boston, MA, he comes from a jazz background and has since made his home in the worlds of free improvisation, electro-acoustic music, and noise.

With musical interests ranging from funk to gamelan to the singular beauty of everyday ambient sounds, Ted’s playing is often viewer as more textural or even melodic than rhythmic per se, and generally uses a ‘prepared’ drum kit. The inspiration came not only from other drummers and musicians, bus also from seeing artists in other mediums expanding their palettes.

Ted divides his playing time between a variety of ad hoc free improvisation situations. Additionally, Ted has performed in the ensembles of Charlemagne Palestine, David Watson, Ace Farren Ford (LAFMS), and as part of a Scratch Orchestra along with Steve Roden, Rick Potts, David Muller and others. Other projects have included percussion for a projector/light installation by legendary Fluxus artist Jeff Perkins, playing as part of Gabie Strong’s UR Rituals project made possible by the University of California, and performing in ensembles and solo at a variety of Los Angeles galleries and museums, including the Los Angeles County Museum of Art (LACMA).

In 2010, Ted was the recipient of a grant from SASSAS (the Society for the Activation of Social Space through Art and Sound) and Meet the Composer to compose and perform a work for the 25th anniversary of the city of West Hollywood. The work was a guided improvisation via graphic score in 5 movements for percussion, electric bass, laptop/feedback generator and accordion. The convert was on June 26th, 2010. Just prior to that, Ted also played as part of the 10 year anniversary event for SASSAS alongside musicians such as Nels Cline, Tom Recchion, Chas Smith, Dennis Duck, Wadada Leo Smith and many more.

A constructor of low- and mid-tech electronic and software devices, and an occasional score-maker, he is interested in partial, and partially frustrating, context-specific artifacts; artifacts that amplify social relations and corporeal identities and agencies, and, in some instances, objects that obscure the location of the author.

Kris Tiner is a California-based trumpet player, composer, and improviser. Featured on NPR Music as one of five new trumpet voices impacting modern music, Tiner has been described as “extraordinarily inventive” (Signal to Noise), and LA Weekly jazz critic Greg Burk claims, “Trumpeter Kris Tiner can turn barbed wire to beauty.” He has performed at concert venues and festivals throughout North America and in Europe and West Africa, and appears on over 40 recordings. His own projects have been released on the Clean Feed, pfMENTUM, Nine Winds, and Evander Music labels. As a composer-improviser, Kris has received awards from ASCAP, the American Composers Forum, Chamber Music America, the International Association for Jazz Education, and the John F. Kennedy Center. In addition to numerous interdisciplinary collaborations involving dance, poetry and spoken word, visual art, film, and animation he has recorded music for radio, television, and motion picture scores and his trumpet playing has been heard on MTV, NBC, and Comedy Central. His primary musical projects include the Empty Cage Quartet—a collaborative new jazz ensemble that has been hailed as “one of the most powerful and appealing jazz units currently active” (All About Jazz)—and Tin/Bag—a duo with Brooklyn guitarist Mike Baggetta that explores “abstract yet jazz-derived realms of expansive lyricism and liquid melody” (Time Out New York). Kris is a regular member of the Industrial Jazz Group and a founding member of the Los Angeles Trumpet Quartet. Among the many notable musicians he has performed and/or recorded with are Vinny Golia, Wadada Leo Smith, Leroy Jenkins, Donald Robinson, Gerry Hemingway, Nels Cline, Mary Oliver, Ken Filiano, Kraig Grady, Tatsuya Nakatani, Taylor Ho Bynum, Jeff Kaiser, Anne LeBaron, G.E. Stinson, Steuart Liebig, Alicia Mangan, Hans W. Koch, Pete Christlieb, Motoko Honda, Michael Vlatkovich, Joe LaBarbera, Harris Eisenstadt, Lukas Ligeti, Aurelien Besnard, Sara Schoenbeck, Phillip Greenlief and Brad Dutz. He has been a featured performer at the Festival of New Trumpet Music (FONT) in New York City, Clean Feed Festival (New York), Aperitivo in Concerto (Milan), Le Mandala (Toulouse), Is That Jazz? Festival (Seattle), Trummerflora Spring Reverb Festival (San Diego), The Outpost Creative Soundspace Festival (Albuquerque), and at annual conferences of the International Association for Jazz Education and the International Society for Improvised Music. Kris holds an MFA in African-American Improvisational Music from California Institute of the Arts and a BA in Music from California State University, Bakersfield. He has lectured on both music and visual art, and currently teaches courses in jazz and American popular music at Bakersfield College. He is also an adjunct faculty member and current Interim Director of Small Jazz Ensembles at California State University, Bakersfield.