Previously posted individually, I’ve now collated the audio excerpts from Richard Barrett and Han-earl Park’s CD, ‘Numbers’ (CS 201 cd) on the album specific post, on my discography, on the project page, and below: 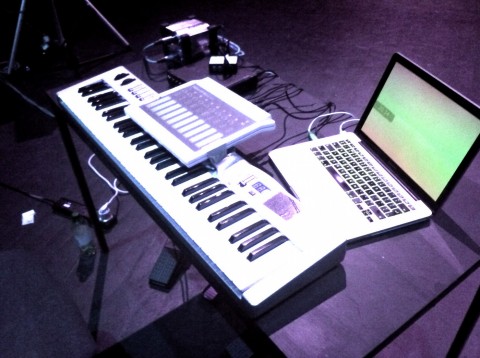 lively, relevant, dizzying electroacoustic music; music that seems to be daring us to try and catch it. [More…]

Third audio except from Richard Barrett and Han-earl Park’s CD, ‘Numbers’ (CS 201 cd) released by Creative Sources Recordings. This clip is from ‘tolur,’ the track that opens the CD. Does it dare you to “try and catch it”? [About the recording…] [About this duo…]

[Han-earl] Park is one of those scary polymath guys who seems to have a tremendous facility for music, both improvising and composing it, and he has played in many groups and at many festivals, appearing around the globe in seemingly ubiquitous fashion. Scariest of all is his intense and speedy guitar technique, which on parts of this album presents a rush of tangled information that would require a bank of dedicated computers to solve it…. Never too “glib” in his phrasing and throws in multiple fishhooks and other barbs to snag our ears, otherwise we might be tempted to switch off in the face of his effortless glides and spiky dense riffs. It’s also good to find him in this duo set-up where the detail of his playing can be more clearly heard than in Mathilde 253. The Englishman Barrett is also a composer, like Park sometimes situated in an academic and teaching context, and is no stranger to using electronics in the live situation having formed the FURT duo with Paul Obermayer as long ago as 1986…. Regardless of whatever intricate and dazzling shapes are thrown at him like crystal spears by his sparring partner, he responds in kind with impossibly twisted gurgles, shrieks and salivated electronic utterances. Throughout album, a lively and sizzling session of fierce interplay is staged between these two boxing kangaroos, with sqwawks and yelps a-plenty as another blow is landed on the respective muzzle or snout. The striking thing is that neither player appears to be breaking into a sweat at any time, and I have the abiding mental image of two unfazed chess players sitting in a deep-freeze unit, weaving complex theorems while remaining almost immobile in large leather armchairs. The music has that degree of rigid control, of brittle precision, even when the structure appears at its maddest and the musical data is flying wildly beyond the point of interpretation. The value of this music as a form of invented language is emphasised by the odd titles, ‘tolur’, ‘tricav’, ‘ankpla’, ‘uettet’… as if counting upwards in Venusian. [Read the rest…]

Do you feel the need for some gargling? convincing? crawling? craziness? dizziness? …or telegraphs? Luc Bouquet’s take, at Le son du grisli, on ‘Numbers’ (CS 201 cd) by Richard Barrett and Han-earl Park:

And, by the way, on Tuesday (December 18, 2012) François Couture (Monsieur Délire) will be playing selections from his 2012 Demanding Music Top 30 at Délire Actuel (CFLX 95.5 FM, Sherbrooke, Quebec). Along with some other great music from this year, it might be an opportunity to hear a little of ‘Numbers’. [More info…]