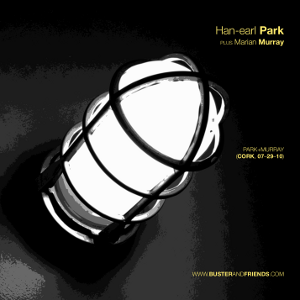 The complete recording of the July 29, 2010 performance by guitarist, improviser and constructor Han-earl Park plus violinist and improviser Marian Murray, is now available for download via Bandcamp. [Bandcamp page…] [Download now…]

Originally released in December 2010, it was the second of a series of download releases hosted at busterandfriends.com. This bandcamp-hosted edition offers the option to download the recording in multiple formats including lossless.

Unlike some of the past download releases from busterandfriends.com, this one, like the newer series of downloads (Jin-Park-Weeter (Cork, 01-24-11), Park-Schroeder (Cork, 03-26-09) and Sikora-Smith-Park (Cork, 04–04–11)), is hosted at Bandcamp, and available as a ‘name your price’ album. Although you can download the recording for free (name €0 as your price) with certain restrictions, please consider paying at least the recommended price. Your generosity will help support the performers and their work.

Cork 7-29-10, much of it solo, might be the best way into Park’s protean guitar syntax. The space is huge, which allows for exploration of resonance, but the recording is also fairly close, facilitating clarity of detail. The latter proves especially important as Park slams through blocks of sound and these deteriorate into shreds and scraps, punctuated with what can only be described as ululations, which become more prominent as things proceed. Park’s often-distorted fingerwork, much of it conjuring shades of the human voice, also references Derek Bailey’s rapid-fire volume shifts and Joe Morris’ fleet runs while sounding like neither. While violinist Marian Murray does not exactly speak Park’s language, there is certainly a shared interest in brief but pithy phrases and space that keeps communication at a high level.

A solo performance by guitarist-constructor Han-earl Park exploring, with feedback and resonant buzzes, the complex, cavernous acoustics of the Lewis Glucksman Gallery, and the interactions between artifact (guitar) and the body (guitarist). For ‘Strokes and Screwballs,’ Park is joined by violinist-improviser Marian Murray for a conversational improvisation.

Marian Murray completed a degree in music at University College Cork. While there she became heavily involved in improvised music within the college and without. Mainly focusing on small group improvisations she has also collaborated with contemporary composers and multimedia artists. She has performed in a variety of settings from the Irish National Concert Hall, to the Cork Opera House, to art galleries, and with musicians such as Han-earl Park, Alexander Hawkins, Bruce Coates, Ian Smith, Murray Campbell and Charles Hayward.