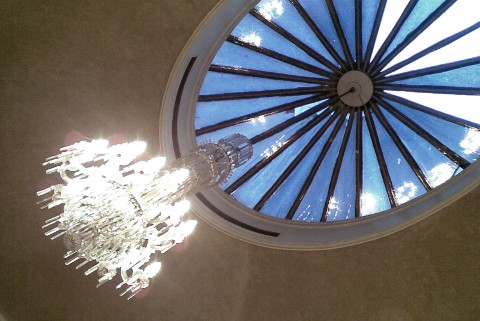 Thanks to all those hosting and organizing the performances: Mike Hurley and the rest of the Fizzle gang, Sibyl Madrigal of Boat-ting, Matthew Collings (who also sourced the tools for a mid-tour kluge repair of my amplifier), and the Lewisham Arthouse. Kudos to Reka Sanders, Joe Hope and Han-ter Park for putting a roof over this itinerant musician.

Big thanks to Paul Dunmall and Mark Sanders for the high-energy, musical workout, to Owen Green for introducing me to the musical (and comical) applications of a cardboard box, to Pat Thomas for his skill and wit, to Lol Coxhill for being the inimitable Lol Coxhill, and to the rest of Mathilde 253—to Charles Hayward and Ian Smith—for pushing and pulling into ever more fascinating musical spaces.

Last but not least, thanks to all who came to listen/watch.

Performances coming up this month with Paul Dunmall and Mark Sanders; as part of Mathilde 253 (Charles Hayward, Han-earl Park and Ian Smith) with Pat Thomas and with Lol Coxhill; plus more, in Birmingham, Edinburgh and London (see the performance diary for up-to-date info).

END_OF_DOCUMENT_TOKEN_TO_BE_REPLACED

A playful collision of personal, social and musical histories, Mathilde 253 is a site where tradition and idiom are not straightjackets nor limitations, but playgrounds for real-time (re)inventions and (re)configurations.

As a constructor of low- and mid-tech electronic and software devices, and as an occasional score-maker, he is interested in partial, and partially frustrating, context-specific artifacts; artifacts that amplify social relationships and, in some instances, objects that obscure the location of the author.

He is involved in collaborations with Bruce Coates, Franziska Schroeder, Alex Fiennes and Murray Campbell, and is part of Mathilde 253 with Charles Hayward and Ian Smith. Recent performances include Mathilde 253 with Lol Coxhill; duo concerts with Paul Dunmall, and with Richard Barrett; trios with Matana Roberts and Mark Sanders, with Kato Hideki and Katie O’Looney, and with Thomas Buckner and Jesse Ronneau; as part of the Evan Parker led 20-piece improvising ensemble; and the performance of Pauline Oliveros’ ‘Droniphonia’ alongside the composer. His recordings have been released by labels including Slam Productions, and DUNS Limited Edition. He has appeared at festivals including Sonic Acts (Amsterdam), the Center for Experiments in Art, Information and Technology Festival (California), dialogues festival (Edinburgh), Sonorities (Belfast) and VAIN Live Art (Oxford).

Park founded and curates Stet Lab, and teaches improvisation at the UCC School of Music.