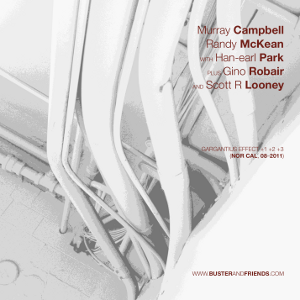 Next download release will be of Gargantius Effect (Murray Campbell: violins, oboe and cor anglais; and Randy McKean: saxophones, clarinets and flutes) with Han-earl Park (guitar), plus Gino Robair (energized surfaces, voltage made audible) and Scott R. Looney (hyperpiano). Recorded during a tour of Northern California, August 2011, the album features tracks recorded at The Tin House (Grass Valley) on August 25th, at Studio 1510 (Oakland) on August 30th. The recording will be available in a variety of formats (including lossless), and as a ‘name your price’ album.

Super excited about this one. It has documents a fun tour, and features outstanding playing from some very, very fine musicians. More info to follow…