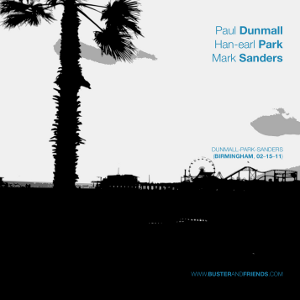 The complete recording of the February 15, 2011 performance by Paul Dunmall (saxophones and bagpipes), Han-earl Park (guitar) and Mark Sanders (drums) is now available for download below.

Very proud to present these recordings; I feel privileged to have performed alongside these powerful musicians. Many thanks to Chris Trent for the recording, and Mike Hurley of Fizzle for hosting the performance.

Recorded on February 15, 2011 at The Lamp Tavern, Birmingham, presented by Mike Hurley/Fizzle. Recorded and mixed by Chris Trent.