“Mind-expanding”? envelopes torn into small pieces to be eaten? a “necessary albeit illusory anchor”? and why is “Diamanda Galás constantly on the verge of asphyxiation”? Dave Foxall, writing in a Jazz Noise and Jazz Journal, finds ‘Sirene 1009’ (BAF000), the album by Han-earl Park, Dominic Lash, Mark Sanders and Caroline Pugh, to be “full creative insanity”:

The Cliodynamics ‘suite’ begins with a recitation in an obscure (likely bespoke) language that rapidly deconstructs against the backdrop of Park’s angular, truncated proto-phrasing, Sanders’ demented clockwork drums, and Lash’s lower register punctuation. Pugh’s voice acts as a kind of guide, offering a frayed and twisted thread through a dynamic and often intimidating soundscape; a necessary albeit illusory anchor. A final wry touch is last two minutes of the closing Psychohistory V, a minimalist coda you have dial the volume right up to even hear—putting the listener in the position of chasing the chaos that moments earlier was so overwhelming.

If this attempt at description sounds rather confused, I’ll try to summarise: years ago, Derek Bailey coined the term ‘non-idiomatic improvisation’, a label that over the years has practically become an idiom in its own right. Sirene 1009 may just be the auditory experience that Bailey’s label has been waiting for. [Read the rest…]

[About this recording…] [Bandcamp page (order CD/download)…] [All reviews…]

“Messy”? “scattered”? “manic”? Music that is “aggressive and acerbic and gets in your face and won’t back down”? In his review of ‘Sirene 1009’ (BAF000), Dave Sumner of Bird is the Worm concludes: “This album is brilliant. This album is insane.”

Sirene 1009 is a soundtrack for a seizure. It’s spasmodic and flails about wildly. The music is disconcerting. But it enters these fugue states of focused intensity that border on meditative, and it is the most powerful sensation to experience even the tiniest hint of serenity at the center of so much chaos. It’s unsurprising to discover that the three-part “Cliodynamics” suite was recorded live. Even via the recorded medium, there’s a palpable electricity transmitted by this music, and its voltage isn’t the least bit muffled for not having been there in person….

Mostly, Caroline Pugh‘s vocals are of the wordless variety, and so dramatic are her renderings of human sounds that it’s not inconceivable she created an alternate lexicon specifically for this recording. Park’s guitar style can be the sonic representation of slash-and-go rush hour traffic, and of significance to the success of this session is how he simultaneously captures the immediacy of individual cars in motion and the oddly hypnotic flow of mass traffic viewed from an isolated location. On bass, Dominic Lash slings out notes like stones across the surface of water. There’s a sudden burst of velocity and a magnetic patter of rhythm, and with one action, the bassist adds both melodic and rhythmic textures to a canvas that might not otherwise keep its brushstrokes contained. That said, when Lash breaks into a passage of bass arco and maintains that as his sole interest for a time, the music certainly doesn’t suffer for his abandonment of a rhythmic role. Besides, drummer Mark Sanders does a remarkable job all on his own at providing definition to music that is never clear-cut and direction to musicians capable of moving everywhere all at once. [Read the rest…]

Elsewhere, Avant Scena describes “evocative and original” music in which “various elements of rock, free jazz, creative jazz are combined in one composition.” [Read the rest…]

[About this recording…] [Bandcamp page (order CD/download)…] [All reviews…] 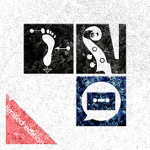