…There is no doubt that Sikora is the most luminous of the three, so much so that this recording is, now and forever “one of Catherine Sikora’s early recordings.” This is less the recording’s fault and more the fault of Ms. Sikora’s continued emergence as a leading, steering voice on the tenor saxophone. [Read the rest…] 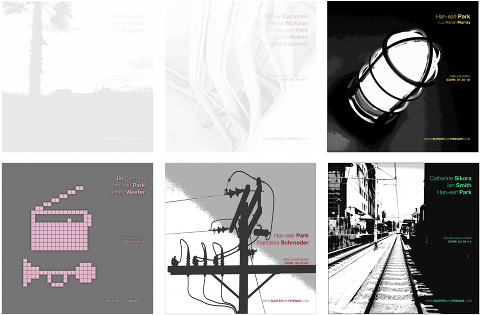 A live recording from ‘Saturday The Fringes’ mainstay Han-earl Park. This is quality improv jazz, the kind I often feature on ‘Saturday The Fringes,’ but something about this album, I dunno, just seemed to have crossover appeal. Plus, I’m addicted to the album. So, we’re giving it a weekday slot on the download schedule. The kind of album filled with tunes that reward patience and open-mindedness.

‘바르트’ by Catherine Sikora, Ian Smith and Han-earl Park is today’s featured download at All About Jazz! Thanks to AAJ downloads editor Dave Sumner for selecting the recording.

Previous All About Jazz featured downloads

The complete recording of the April 4, 2011 performance by Catherine Sikora (saxophone), Ian Smith (trumpet) and Han-earl Park (guitar) is now available for download. (Special mention to drummer, composer and electronic artist Jeffrey Weeter who couldn’t make the gig, but who, perhaps, is there in the recordings in spirit.) [Bandcamp page…] [Download now…]

Unlike previous download releases from busterandfriends.com, this one is hosted at Bandcamp, and available as a ‘name your price’ album. Although you can download the recording for free (name €0 as your price) with certain restrictions, please consider paying at least the recommended price. Your generosity will help support the performers and their work. (Many thanks to Alex Fiennes, Corey Mwamba and Anton Hunter for Bandcamp specific advice and support.)

A wonderful gem of a recording.

There is a new surprise around nearly every corner throughout this often fascinating performance.

A one-of-a-kind improvised musical meeting between artists from Ireland based overseas, and a then Ireland-based artist from abroad which took place on April 4, 2011 at The Roundy, Cork, Ireland.

This was a rare performance in Ireland by Catherine Sikora (New York-based, originally from West Cork), a saxophonist with a striking, compelling sound. She has been described as “a free-blowing player’s player with a spectacular harmonic imagination and an evolved understanding of the tonal palette of the saxophone” (Chris Elliot, Seacoast Online). Sikora was joined by cofounder of the London Improvisers’ Orchestra, trumpeter Ian Smith (London-based, from Dublin), and guitarist Han-earl Park (then Cork-based, currently Brooklyn-based, from California). Smith and Park had just come off the tour as part of the power-trio Mathilde 253 (with Charles Hayward) with the legendary composer-improviser Ishmael Wadada Leo Smith.

All music by Catherine Sikora, Ian Smith and Han-earl Park

Ian Smith has performed with Evan Parker, John Stevens, Maggie Nicols, Lol Coxhill, Steve Beresford, Eddie Prévost, Greg Tate’s Burnt Sugar Arkestra, Reeves Gabrels, John Sinclair, Harris Eisenstadt and many others. In 2000 he recorded his second CD as a leader, Daybreak, with Derek Bailey, Veryan Weston, Gail Brand and Oren Marshall. His own trio, Trian, has played the London Experimental Music Festival and the Soho Jazz Festival. He also participated in a reformation of Cornelius Cardew’s Scratch Orchestra in 1994. He has collaborated with composer Roger Doyle, winner of the Bourges International Elecro-Acoustic Music Competition, and he has been featured on two instrumental tracks by the hip hop band Marxman. He toured the UK with Butch Morris’ London Skyscraper conduction project. He cofounded the London Improvisers’ Orchestra and The Gathering.